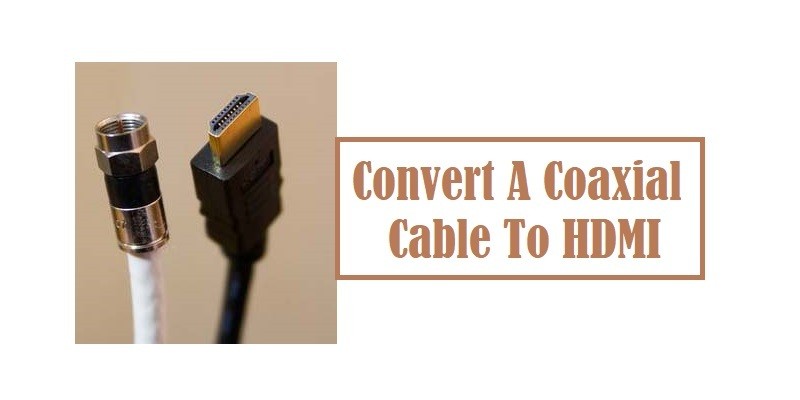 How To Convert A Coaxial Cable To HDMI?

Coaxial cable or “coax cable” was invented to carry radio signals in 1880 by the English mathematician, engineer and physicist Oliver Heaviside. It is composed of two-layer copper wire surrounded by insulation and shielding. The term coaxial came from two conductors (inner and outer) sharing a single geometric axis.

The purpose of making coax cable was to deliver minimally-interfered analog signals. First it was used in radio and telegraphy. Then, TV, broadband and computer technology used it next. These days, people enjoy most of a new technology called fiber which offers the fastest transmission speed so far.

Convert A Coaxial Cable To HDMI

Why do we need to convert coax to HDMI?

Audio and video signals are carried by coaxial cable from a TV programming source to a TV set. High definition TVs are supplied with various jacks so it can be connected to a source. However, some TV packages do not provide one. So it needs to be converted.

HDMI (High Definition Media Interface) is the most common of these digital connections. It uses a 6-sided plug to get the highest video and audio qualities.

Here’s how to convert the coaxial cable to HDMI:

Now we know that to convert coaxial to HDMI, one needs a powered adapter. This adapter can be attached to both cables within minutes.

Technology evolves so fast. Others say with just the blink of an eye. Fiber may be the most in-demand for communication technology, who knows a few months or years from now, there will be another progression to this speed and signal generation?